Back in June I mentioned how tiring it is to be playing regular tournament chess, when so many other life responsibilities seem to be there, waiting for your attention. However, that specific tournament I made a fatal mistake. I refused to take a bye and tried to play all 3 days, despite the Friday game being very challenging, you really have to be local to play a 4 hour game at 7PM as driving either side of that tends to be pretty bad. On the way there it's traffic, on the way back it's diversions, Friday night's party traffic! That night I ended up getting home way past midnight, shattered and that resulted on me trying to play less OTB chess, I even withdrew on Sunday. Ouch. Well, I think I learned my lesson and I am finally ready to get back to OTB classical time congresses. I am playing one next weekend and I am looking forward to it. I'll control my eagerness and take that first round bye... 4 games is enough. Even that is a lot. I got greedy when I tried playing all 5 and was rightly punished by Fortune that night. I think I was simply too eager to replicate my Frome Congress success.

Earlier in the year I also questioned why I hadn't learnt John's Scandinavian repertoire yet. I set this right and have picked up IM John Bartholomew's Scandinavian repertoire. I think I can play 90% of the lines with confidence, and this is an IM level repertoire so these days I really look forward to facing 1.e4. The more I play it, the more I study it, the happier I am that I finally learnt it. Based on this, my opponents would do well to take notice and play anything else really. However, I am also slowly picking up a GM level repertoire for Black against everything else. My goal here is to fully sort out all my openings as Black and really really learn them well. Then I can compare my results as White versus my results as Black where I know the openings. This would finally settle the debate about how important it is to know or not know the opening at our level of chess. Honestly, I might be biased, but whenever I play within the opening I know it's just so much more joyful. I faced an IM in my first ever rapid chess event and he struggled so much because I blitzed out 18 moves of theory that led to a drawish position. Yes, he did win in the end, after 70 moves in my heavy time pressure, but since he was 500 points higher than me I consider this a big result. He even thought he was losing at one point where he went a pawn down. Unfortunately, he had more than enough compensation and in the complications my time pressure was the most telling factor.

Aside from finishing up my Black repertoires, I want to note that I did have a complete repertoire as Black and White before, but it was very shallow, without going into too much detail and this was often telling. I got tired of being outplayed by people who knew a bit more theory, a few more plans, which is why I am putting the work of learning 300+ variation repertoires instead of the 100 lines I used to know. I think 100 lines is useful up to 1,800, but playing at 2,100+, or higher, people just know theory, whether they read it, or figured it out through self study, they are aware of the best moves and if you go off they punish you. My game against Koby Kalavannan in the Bristol Summer Congress, showed that clearly. I played a normal looking move which 4-5 masters have previously played (in the database), and it just turned out to be giving White a seriously big advantage... which my 2300+ rated opponent pounced on.

Once I sort out my Black repertoire, my plan is to focus on tactics and strategy only and see if my results as White catch up too. I might also try various Short & Sweet repertoires as White, maybe the London System, to try and find what openings I actually enjoy playing as White. I do love the Italian Game but most people will play the Sicilian against me, so maybe the London System would be good to avoid those sharp Siclian lines.

Another thing I've done lately which I feel has improved my game is to slow down my blitz time controls. I was playing 3|0, then 3|2 and struggling, getting frustrated, timing out. I had not time to think ever. I switched to 5|5 and really enjoyed it. My Blitz rating went up and the games I lost had clear reasons why, reasons I could work on. I think my rapid has benefited from that too and I am on my all-time high at chess.com. I honestly think I'll hit a 2,000 rating somewhere. The goal I set myself, but maybe, it will happen sometime next year :)

Of course, I'm also somewhat of an endgame Master and can mate with Bishop & Knight! This is thanks to completing 100 Endgames You Must Know on Chessable. It's awesome, but in my games I don't get to benefit enough, or at least I don't think I do. Not too many endgames yet, but when one happens, my opponents usually pay... I had several games where I rescued them and won in the endgame. 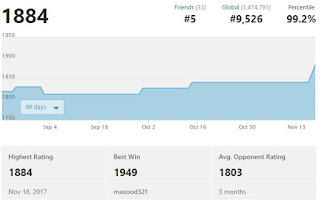 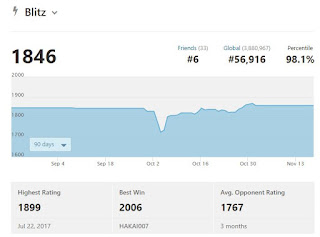 Alright, I just wanted to log some of my progress and plans, so that it's there in writing documenting my chess improvement. See you soon!