Luckily there is no boss to tell. Phew. However, the gradually shrinking wallet is definitely complaining, each day a bit louder. I've played back to back 15|10 games since 9AM. It is now 9:30PM and I want to play more. So fun!I should have it out of the system by the end of tonight. I'm sure. There is only so much losing I can do. The opposition, ranked in the 98-99th percentile of players, is proving really tough. I only win about 1 in 4 games. These games are won by playing almost completely blunder free, at least until the endgame. I am now flirting with a ranking of 97.5th percentile, which makes me feel great, yay!I had a game against an opponent rated 2,000 (I'm rated around 1,600). I worked so hard, but in the end, the fact I was up an exchange, was only enough to get a draw from the game. I noticed in the computer analysis, that some very subtle moves, reduced my advantage from +3pts, to eventually just +1pt. This small advantage my opponent defended skilfully in the endgame. At least I didn't fall for one of this many shifty knight forks throughout the 50 or so moves in the end game.I've concluded, that the key to my increased rating, is definitely how much theory I can remember to get out with a small advantage from the opening. The more theory I remember, the more time I have on my clock to find good moves once I do not know the theory. Most of the games that I've lost, seem to be because the opponent still has 12+ minutes on the clock while I am starting to feel the pressure with no more than 4 minutes on mine. I've almost lost a few because opponents have played rare openings, in which I'm out of theory I know by move 7. Ouch.Don't get me wrong, I realise that I should be able to find the best move in any position, without knowing theory. I know that! But it's bloody hard work!!! It's definitely impossible to do so in blitz games, at least at my current level. I am going to have to play some more on-line "correspondence" chess, in order to build up my knowledge of theory by practice. I am also going to try what "Chess for Zebras" suggests and find interesting positions, and then practice finding the best move and do an analysis, within 20 minutes. Then compare my results with the actual GM facts. This is meant to improve my concentration and help me solve similar positions faster in the future. We'll see about that.The TLDR; play bloody slower paced games until I learn more theory and have more practice under my belt. Playing a whole day of fast chess is not gonna get me anywhere!!! But at least it was fun.My rating on 15|10 now is exactly 1,600. I promise to myself I won't play another 15|10 until I hit 1,850 on Correspondence Chess.
Posted by Unknown at 12:36 No comments:

Today I started on the booklet on Soviet chess secrets I bought in Moscow. 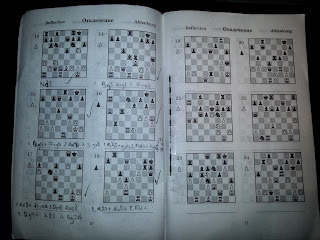 Okay, its not exactly top secret but I am hoping to get some results from it. I bought it from the most famous book shop in the whole of Moscow, so it should be solid. I hope? They had a huge chess section and this one book stood out from the others. Although to be fair, it is the very first tactics book I've ever owned.What attracted me especially is that this compilation has been designed for players with an ELO from 1,700 to 2,100. Each problem has a difficulty rating for the different ELO ranges. That's kinda cool, no?I am having a very easy time solving the 1,700-1,800 ELO range and I am hoping that is the case up to 2,100. Does this mean I potentially could be rated around 1,700 ELO right now? Maybe. That'd be cool. If I can keep it up to 2,100, it would be a huge confidence boost. It would help solve some of the dents in confidence, caused by the huge pessimism that revolves around the adult learning of chess.A slight confidence dent also came from Tactics Trainer on chess .com; I hadn't done it for weeks and probably only about 4 hours on total in the whole of last month. In contrast, the month before that, I did between 30 and 40 hours of TT! The result, I dropped about 200 points of rating and felt completely stupid. The lesson, keep doing TT everyday, even if its just for 15 minutes.I am gonna hold myself to that. 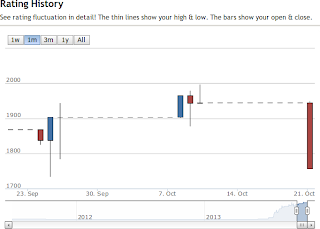 Yet another week that goes by without studying chess, due to catching a cold (and not making a schedule!). I'm finally shaking it off and if today's bad diet doesn't undo my recovery, then I shall be back on track starting tomorrow.I've played quite a few 2|1 bullet and 10 min blitz games this week. I've mostly noticed that there is no way in hell I am getting above 90th percentile in 10 min blitz (and bullet).  where I feel I still have lessons to learn.I seem to have winning positions, yet lose every time. It went as far as being up a queen and losing on time, because I could not find straight forward simplifications. In hindsight, I should have traded a rook for the menacing bishop, but no matter, I am definitely not ready to make a go of 10 minute blitz games yet.Then I started playing 15|10 games. I had stopped because I was tired of facing opposition 100-150 points below my rating. However, I found that if I can wait 2-10 minutes, I can get an opponent way above my own rating. This way, I got a few games in vs people rated from 1650-2000!!! I enjoyed these games much more, even though I only managed to win 1 out of about 5. The person I beat was rated 1714. The player rated 2000 just escaped me the first game, where it was an even fight for about 35 moves before he edged me out with just 1 pawn's advantage. I noticed these games are much harder, but they are thoroughly more enjoyable. I will get quite a few of them in this week and hopefully my win rate can start going up.I still can't find much enjoyment from correspondence chess. It feels more like a chore than fun. Whenever I see a position I know is complicated I seem to procrastinate my move. I think I'll enjoy OTB much much more. Whenever I am in a live game it just seems more important and tons more fun. However, I will set time apart this week to practice Phillip Ochman's method in correspondence chess. I will also make sure to make a schedule this week, so that I can make some tangible progress as I did the beginning of September. I plan to finish "Chess for Zebras", do tons of tactics, study some endgame theory and play some well thought out correspondence chess.My main new goal: Beat a player rated 1900+ in 15|10.PS.- This week I read about a programme that takes 2 years to take you from 2,200 ELO to IM (2,400 ELO). Flipping heck... I really need to beat the norm here. It has to go quicker than that!!!
Posted by Unknown at 13:06 No comments:

I'm very close to my goal of 99th percentile. My biggest problem is managing to move without thinking a move through. This happens every now and again... and again. Basically, if I've thought of a sequence of moves, I will nearly pre-move my pieces when actually I have 5-10 minutes on the clock, with time to check myself again. Obviously, GM's recommend to always double check your moves so I am failing this basic premise and it is costing me a lot of points.
It is especially painful because there seems to be few people rated 1,550+, so every time I lose against someone rated 1,450-1,500 I end up losing 10 to 12 points. Whereas when I win, I am only getting 5 points.
I've had a few games against people rated 1,575-1,600 and I've won them, so I am quite confident of reaching 1,650 to 1,700 in the coming two weeks or so. I hope, that translates to 99% so I can set a new goal.
Studying has been slow this week. I've wanted to spend a lot of time with people I care about so that left less time for studying. Then I got ill. Ugh! I am hoping to pick up the studying after this Wednesday. This will mark nearly a month without studying, aside from reading a couple of chapters of a book and doing a couple of hours of Tactics Trainer.
Moreover, if anyone cares, I attribute my incredible rating climb in the last study-less month to actually getting some games in, getting some real practice done vs real players. I got this premise from the book "Chess for Zebras", where the author argues that all the knowledge in the world is useless if you can't put it into skill. Skill comes from playing games. I haven't finished reading the book yet (as I said, I've hardly studied!), but so far I really like it. It's unconventional and I really makes sense so far.
The other thing I can definitely attribute my rating hike to is Tactics Trainer. While in the last month I hardly did any problems, the month before this I did a lot! I notice in my latest games, that I am unforgiving if my opponent blunders, whereas before, I may have missed a lot of those opportunities. As an example, I had about 10-30 seconds on my clock left, vs 5-7 minutes. My opponent played a not so obvious blunder but in under a second I had spotted it and played the right move to punish him. Game below:

White just played 39. Kf3 ?? - I have 10 seconds or so on the clock. He has over 5 minutes. It looks like the pawn on f4 is in trouble and I have to go on the defensive. However, thanks to TT I spotted the winning combination in a split second. Yay!

Back From Russia - Lesson learned, never give up!

I had some business to attend to in Russia and I did not get to study chess at all. It's a huge shame, but on the positive side:

I have kept my on-line (correspondence) chess games going on and I am very surprised that I have won about 5 in a row of them. It looks like me studying is paying off, seeing as I thought I was worse off in most of those games but I ended up winning anyway against skilled opponents.
I will be getting back to studying next week and hopefully make some more progress. I really hope to achieve 99th percentile on 15|10 and On-line chess really soon. Currently I stand on 95.7% and 92.9% respectively. Not too far off, I suppose.
Posted by Unknown at 03:14 No comments: