Also at: http://unratedtogm.quora.com/How-I-made-30-000-this-month-by-not-playing-chess
Posted by Unknown at 09:32 No comments:

I've just realised that all my goals are very abstract. Abstract in a sense that I have to play games and achieve good results to get to my goal. This kind of goal does not help because I do not feel a sense of achievement unless I reach a particular rating (eg 98th percentile!). Instead, I should be setting goals that will improve my play whether or not I reach a particular rating. To this end, I've decided my goal for November will be to do at least 50 hours of Tactics Trainer on chess[dot]com and at least 1 hour a day for 20 consecutive days no matter what. This kind of goal can be achieved with just a little bit of determination, and I am guaranteed results whether I win games or not. Also, if I don't achieve it, I will feel ashamed because I know at least one or two of you read this and I do not want to look like an ass by not achieving my goals ;-)As for the progress report, due to my bad goal setting, I've fallen behind quite a bit. I made a promise not to play 15|10 games until I improved, and I have kept that promise. Because of not being able to play those games though, I've lost will to study hard and I've spent my time doing other things instead such as day trading, poker and building a chess web site. The last is the most productive thing I've done, and it will definitely help me when it is finished. However, I am disappointed that I have made little progress on my chess strength.Enough said, below is my miserable performance on Tactics Trainer for October. November shall correct this. I promise myself and the world! 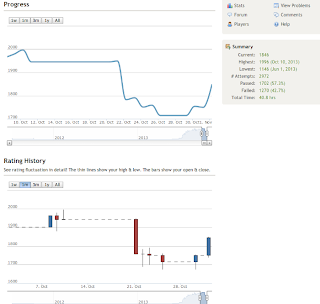